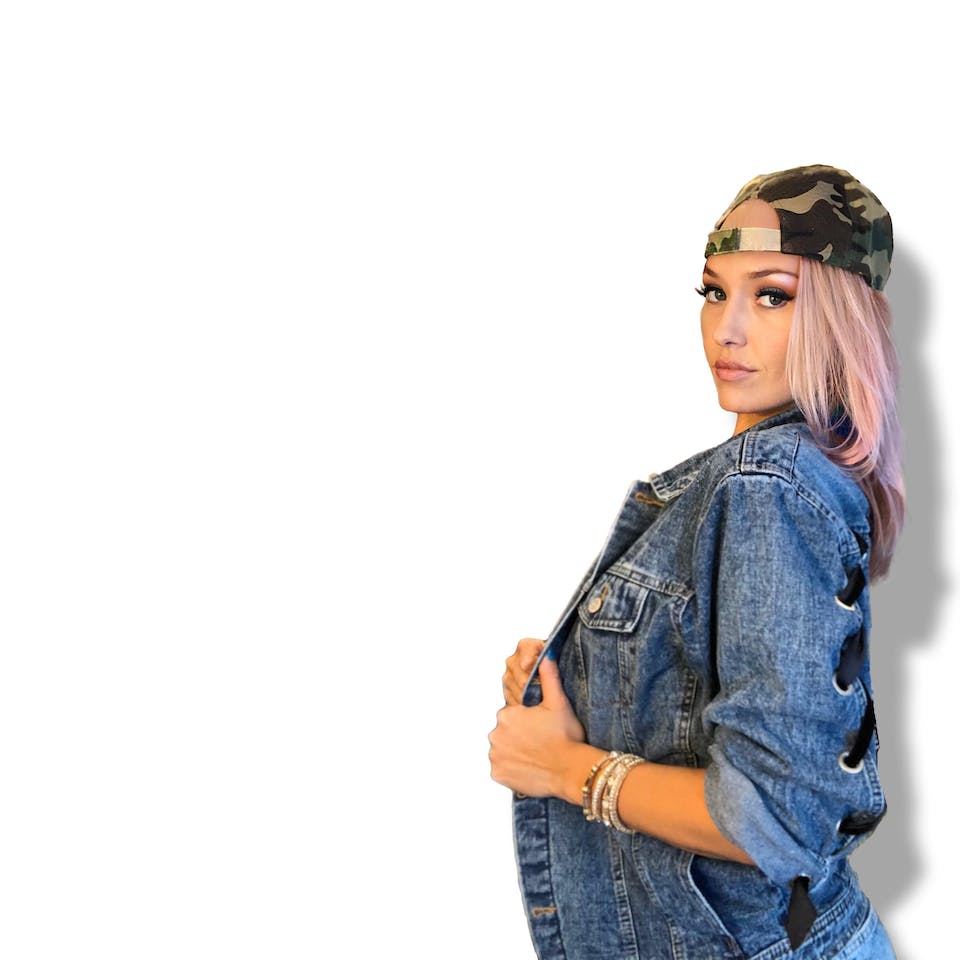 "All Is Bright" Tour

Rylee Anuheakealaokalokelani Jenkins was born and raised in Makawao on the island of Maui. The eldest daughter of a P.E. Teacher and a hairdresser, Anuhea was actually immersed in sports more than music growing up, and it wasn't until middle school that she found her passion for performing arts. She began boarding at the prestigious Hawaiian school Kamehameha Schools from grade 7, and began acting in school plays and musical. She found a passion for video production and received multiple college scholarships for Film School at Chapman University in Orange County, CA. A self taught guitar player, she learned of her passion for songwriting after her first big heartbreak.. and after a soul searching backpacking odyssey in Australia, she realized that Film School wasn't for her. Anuhea decided to pursue her newfound passion for MUSIC full time.

Anuhea continued this soul-searching odyssey back in the islands for a bit, pushing herself outside her comfort zone yet again. Not the pageant-girl type whatsoever, and with zero experience, Anuhea signed up to compete for the crown of Miss Hawaii in the Miss Maui Pageant. (She walked away with second runner up and the trophy for Miss Congeniality.) Anuhea then decided to move to a city that had always fascinated her: San Francisco. Her life there was filled with open mic's, attending live music concerts, gathering inspiration, and writing writing writing. She posted videos and snippets of her blossoming music on YouTube and Myspace. She acted as her own manager, promoter and booking agent, burning CD’s on her home computer filled with songs that she created herself on garage band and at public radio stations. Anuhea began to chart on the Myspace charts for unsigned artists in Hawaii, and began to gain some recognition and buzz. She was introduced to a man named Warren Wyatt through her Aunty Nalani (founding member of legendary Hawaiian trio Na Leo Pilimehana). Together, they decided Anuhea was ready to get into a REAL studio. They sent Anuhea to Los Angeles where, along with producer Drew K, she honed in her skills, gathered her thoughts, and found her voice as a singer and songwriter. Anuhea then had her very first REAL collect Warren Wyatt remains Anuhea's manager and business partner till this day.

Her first album "Anuhea" came out in 2009, and created a name for the young songbird. Anuhea's self titled debut album charted in the top 10 on the iTunes Pop charts, charted on the Billboard Hot 100 charts, and won Anuhea two prestigious Na Hoku Hanohano Awards. It was featured in Honolulu Magazine's 25 Greatest Hawaii Albums of the New Century (http://www.honolulumagazine.com/Honolulu-Magazine/September-2012/25-Greatest-Hawaii-Albums-of-the-New-Century/index.php?cparticle=5&siarticle=4#artanc).

Her second album "For Love" released in 2011 secured Anuhea as a Hawai'i radio staple. "For Love" features some of island music's favorite radio hits including "Higher than the Clouds" "Simple Love Song" and "Come Over Love". These songs helped Anuhea and her music get featured on episodes of Hawaii 5-0, an array of commercial work, and procured her as the face (and voice) of Cargo Cosmetics Spring/Summer 2017 make up line.

This multi-faceted artist/musician is also a mommy. Her son Ikena Jack has toured with his mama, and continues to be her inspiration and motivation throughout her songwriting. After releasing a live album in 2012 (Butterflies: Live), and two EP's in 2013/2014 ("Shoulders" and a Christmas album "All is Bright") Anuhea signed with SRG Entertainment group for a step in a new direction. Her latest album "Follow Me: Deluxe Hawaii Edition" released in 2018, and features songs co-written and produced with a style that have pushed Anuhea's island pop style limits to a new brink.

True to herself, Anuhea's songs are open, honest, vulnerable, and at times cheeky in songwriting, yet always delivered in her signature Pop, R&B and Reggae musical style.

Anuhea has toured throughout the years across the world, sharing the stage with Bruno Mars, Jack Johnson, Ziggy Marley, Babyface, Sugar Ray, and so much more. She headlined the 2011 ProBowl Halftime show at Aloha Stadium, and sang the National Anthem at a Golden State Warriors vs Blazers NBA game, as well as her favorite football team the Minnesota Vikings vs. Seahawks game. She is featured on songs with reggae bands SOJA, JBoog and Katchafire, and continues to write and record in her off time. Anuhea recently SOLD OUT all 4 of her shows at the Blue Note Napa during Labor Day weekend. After this Blue Note Hawaii Thanksgiving Week Celebration, she will embark on her annual All is Bright Holiday Tour across the West Coast of the U.S this December.

On a philanthropic front, Anuhea recently started the Aloha Always Foundation, which seeks to inspire, educate and empower Hawaii's youth by granting scholarships for higher education. Through her fundraising efforts, Anuhea was able to award 8 deserving Hawai'i students with cash scholarships to pursue their education goals. More info on Anuhea's Aloha Always Foundation and its efforts: www.anuheajams.com/alohaalways 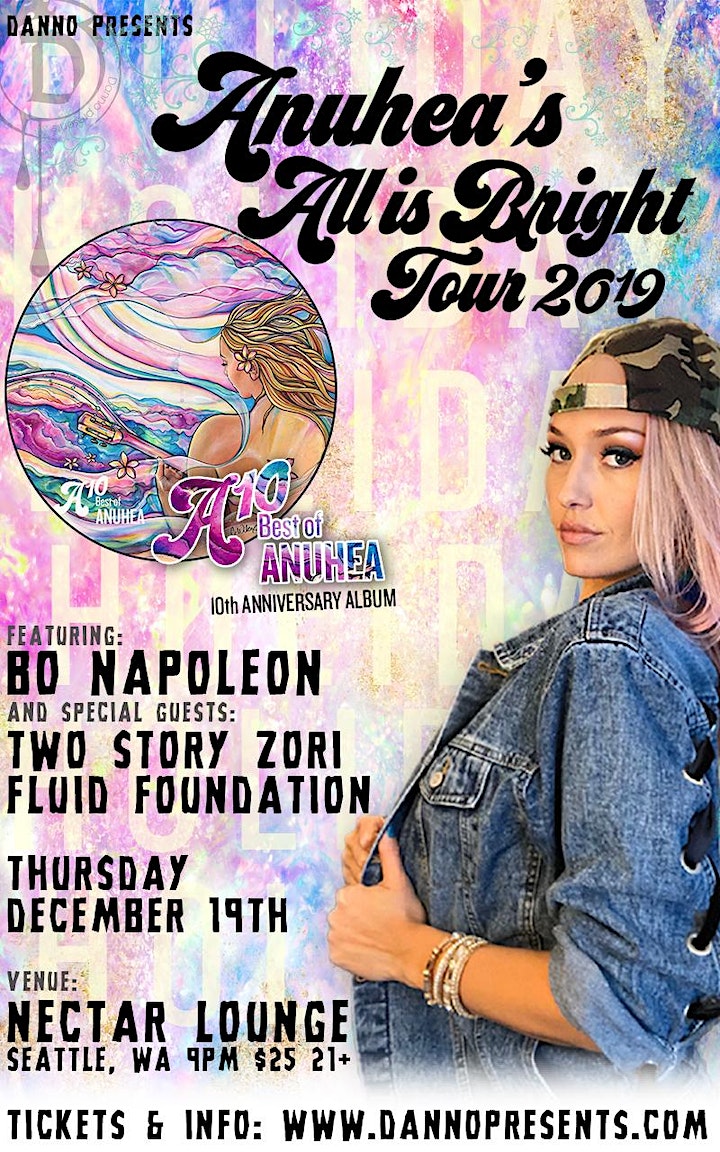