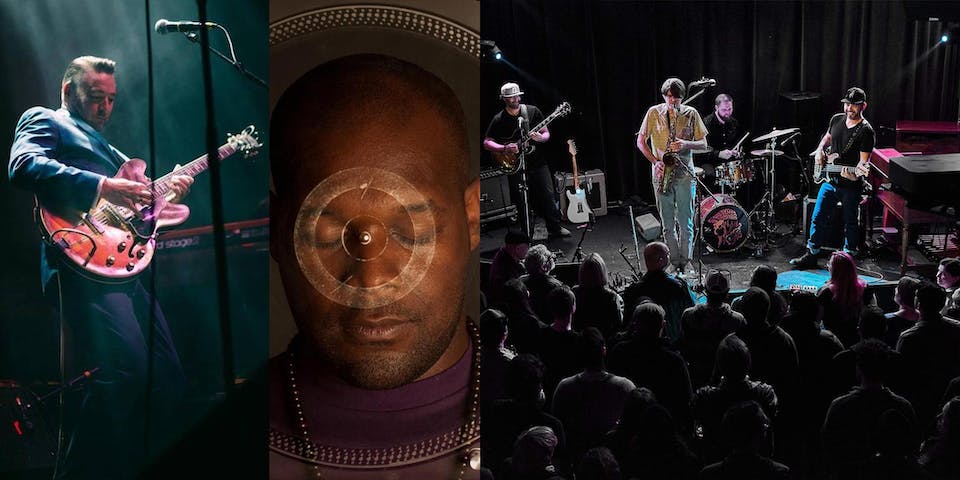 DJ LOGIC (NO COVER with RSVP)

Unsinkable Heavies are a subgroup of the mega all-star Funk Orchestra, Polyrhythmics. The music is decidably greasier, dirtier, and full of EGO ! Big solos, spinning leslies and a no holds barred, "taking it to the top" approach to classic soul/jazz tunes and their own compositions. "Raw Musical Adventurism" at it's finest!

The theorem of turntablist as musician has been long proven in the capable hands of DJ Logic, whom with jazz as his foundation has become a wax innovator by crossing genres and mixing his sound across the map. As one of the world’s most accomplished turntablists, DJ Logic is widely credited for introducing jazz into the hip–hop realms and is considered by most as a highly-respected session musician and an innovative bandleader.

Since his emergence in the early nineties amidst the Bronx hip-hop scene, the New York City based deejay has been amassing a veritable mountain of collaborations, including a full-fledged band with members of Blues Traveler (The John Popper Project ft. DJ Logic), a trio with Steve Molitz & Freekbass (Headtronics), a jazz project with Georgian prodigy Beka Gochiasvili, and as a member of Grammy-winning Arturo O’Farrill & The Afro Latin Jazz Orchestra’s The Offense of the Drum album. He also has a long list of other collaborations with artists ranging from the likes of Bob Weir, John Mayer, Medeski Martin and Wood, Christian McBride, O.A.R., Carly Simon, Marcus Miller, Jack Johnson, Vernon Reid, Warren Haynes, Charlie Hunter, Jack DeJohnette, Ben Harper, Mos Def, The Roots, Bernie Worrell, Bill Laswell, Melvin Gibbs, Fred Wesley, Sean Kuti and many more.

DJ Logic and his role as an electronic-music ambassador keeps him at the top of his game. Whether the scratch artist instructs tablas to flirt with drum ‘n’ bass (such as on his Nina Simone and Billy Holiday remixes found on Sony Legacy’s Remixed and Reimagined volumes), meshes free styling MC’s with Afro-Cuban rhythms (such as on ‘Share Worldwide Funk’ – a remix produced for Jack DeJohnette and Golden Beams Collected, Volume 1), or remixes tracks for rock bands such as Moon Taxi, DJ Logic can always be found paying homage to his predecessors while contributing his vision to the deejay genre.

While the context of his work may vary, DJ Logic’s spinning skills are definitely beyond reproach. He works with a phenomenal roster of invited guests, and he knows how to pick his collaborators as well as his samples. With a growing catalogue of recordings under his belt, DJ Logic’s supreme musicianship and eclectic tastes will allow him to journey wherever an infectious groove may take him.