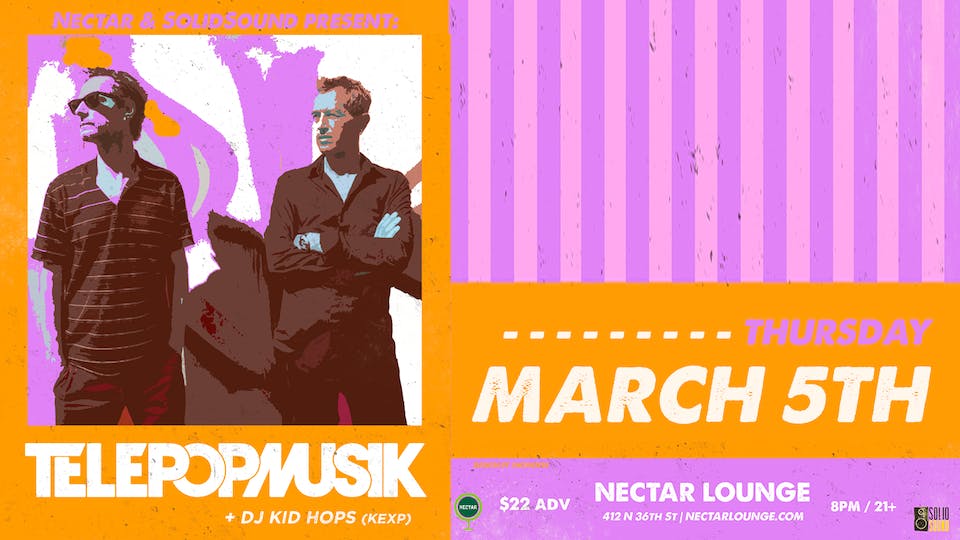 iCal
Google
TÉLÉPOPMUSIK, fully equipped with a live band, is coming to Nectar to finish what they started in the 2000s! Tickets available now!

The group's first album was Genetic World, released in 2001, with several singles from the album released subsequently. The group's second album, Angel Milk was released in 2005. Since 2005 they've gone on to amass over 250,000,000 global streams.

The track "breathe" from the album Genetic World was used in a Mitsubishi television commercial to launch the 2003 Outlander. It was also nominated for a Grammy Award in the category Best Dance Recording at the ceremony held in February 2004 eventually losing out to "Come into My World" by Kylie Minogue.

The track peaked at #42 in the UK Singles Chart in March 2002 and at #9 on the Billboard Hot Dance Music Chart. Angela McCluskey, the co-writer and guest vocalist on "Breathe," is from the American band Wild Colonials.

The track "Love Can Damage Your Health" gained popularity in the house music genre as a result of a remix by DJ/Producer Dennis Ferrer and Abicah Soul.

In 2017 a compilation of Breathe (Remixes) was released on Roche Musique by Kartell and Cézaire & Duñe.

A New SIngle “ Connection” featYoung & Sick is now Out!