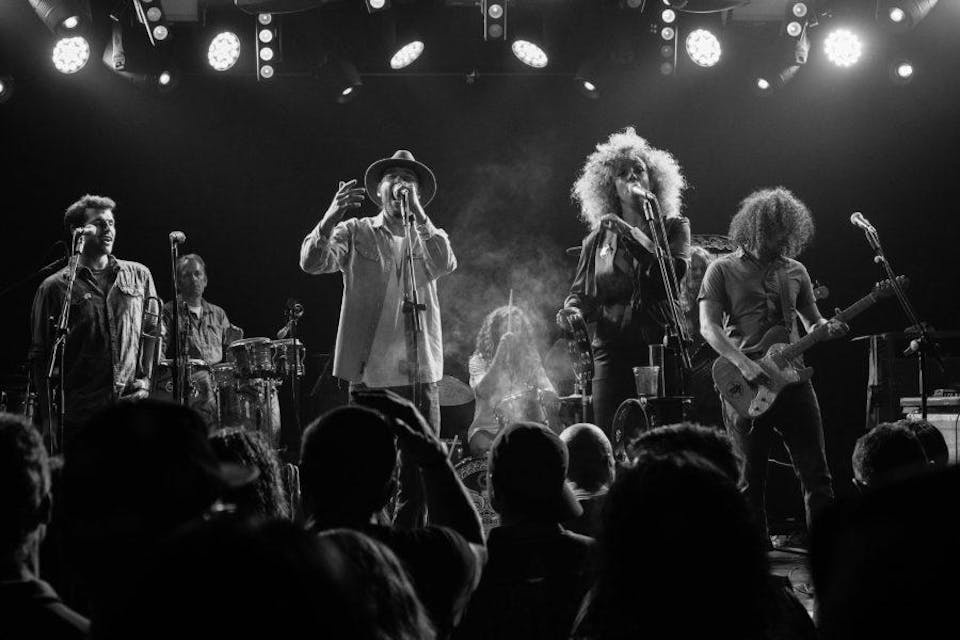 iCal
Google
For nearly 20 years ORGŌNE has churned out gritty funk / soul recordings and toured relentlessly across the US and Europe. Get tickets now!

“After two and a half years on the road, we needed to shut away the rest of the world,” recalls Sergio Rios, guitarist and engineer of Los Angeles-based band ORGŌNE. For their tenth* studio album, ORGŌNE retreated to the tranquil solitude of Joshua Tree in southern California. Ensconced in a ranch home with a recording studio for a week in November 2015, the band improvised late into the desert night, carving out tunes that would eventually become the bulk of the material on Reasons (self-released, due out January 18, 2019). The nine-song collection illuminates a band hitting its stride, capturing the raw power and refined sensibilities that defines ORGŌNE.

For nearly twenty years ORGŌNE (a universal life force, pronounced or-gōne) has churned out gritty funk and soul recordings and toured relentlessly across the United States and Europe. Traditionally both the studio and live iterations of the band drew on a tight-knit collective of the West Coast’s finest funk and soul musicians—although founding members Sergio Rios (guitar/engineer) and Dan Hastie (keyboards) have been constant anchors. However, since late 2013, Rios and Hasite have been joined by Dale Jennings (bass), Sam Halterman (drums), and singer/lyricist Adryon de León to form a permanent nucleus.

Establishing a solid core of musicians was instrumental in creating such a cohesive, tight LP. “It allowed us to develop trust and be vulnerable with each other,” says de León. From the a cappella opening of “All Good Things” to the dance floor filler “Easy Love,” Reasons packs a punch. It’s as if the listener is transported back to those sessions in Joshua Tree, staying up late and jamming with the band. As a producer, Rios shines: “I’ve learned to stop being so precious about every little detail. It’s just art. Sketch your picture and move on.”

That immediacy, a sense of capturing moments, saturates Reasons. Take the second cut, “Hands.” Rios’ rhythmic guitar figure kicks the tune off, perfectly syncing up with Halterman’s solid boogie beat, dense percussion, and Jennings’ fuzzed-out bass line. The verse brings down the dynamics (tom fills replace that driving beat), but de León’s urgent plea for “less talk, more action” keeps the energy high. The massive chorus drops in after sixteen simmering measures and is pure joy. Hastie’s edgy synth line perfectly complements de León’s straightforward command: “Let your hands do the work.” ORGŌNE manages to start the party and fill the dance floor, but they also dim the lights in an undeniably sexy bridge. At first, de León launches into the vocal stratosphere before coming back to Earth with delicate harmonies as the band channels late 70s Fleetwood Mac. A few half note hits later and we’re back into the glory of the chorus. In just over four minutes ORGŌNE seamlessly channels disco, boogie funk, and smooth 70s California rock.

Trusting one another allowed the band to stretch beyond their traditional influences and summon a completely different set of musical heroes. Starting in the mid 1990s* ORGŌNE cut their teeth on instrumental pioneers from the late 60s and early 70s like The Meters and Cymande. Alternatively, Reasons looks toward the late 70s and early 80s for its sonic palette. Hastie’s synth lines evoke Bernie Worrell in the Talking Heads and the rest of the rhythm section lays down a foundation built from the likes of Prince, afro-disco icon Kiki Gyan, The Cars, and more. “It was a conscious choice to have a cohesive tone across the whole album instead of drawing from all types of eras,” Rios says. “It’s almost an interpretation of a memory of the music we all first heard when we were kids.”

Despite the new set of influences, ORGŌNE’s classic analog sound permeates Reasons. The writing sessions in Joshua Tree kickstarted the project but recording at their home base in North Hollywood, Killion Sound, was always the plan. Back in LA, the rhythm section members laid down bass, drums, guitar, and keys to ¼” tape on their famed Tascam 388, providing a thick sonic foundation unequaled on any soul or funk records released today. De León used these raw demos to develop vocal ideas in her car while stuck in notorious LA traffic. In the past ORGŌNE relied heavily on outside collaborators for vocal and lyrical input, but on Reasons De León takes over that role comfortably. While relying on themselves to produce Reasons made the process take longer, it also provided more artistic freedom. The results were clearly worth the wait.

De León is front and center on Reasons, and she does not disappoint. Whether she’s evoking the deep soulfulness of Chaka Khan on “Hands” or the bedroom sweetness of Minnie Ripperton on “Whisper to Me,” de León’s versatile vocal performance firmly places her in the top echelon of soul singers today. The lyrics on Reasons—pulled from a dark brown leather journal de León has had for years—focus on relationships, self love, and politics. Musing on the 2016 election, de León searches for meaning and power within herself despite the troubled times:

We got fooled by the masterpiece

We’re part of his mastery

Looking for the light in me

Reasons is another solid step in a long and storied career. ORGŌNE’s accolades are too long to list in entirety. ORGŌNE’s live show captivates audiences and packs dance floors—whether it’s on sold out headlining tours; sharing the stage with The Roots, Al Green, Sharon Jones & the Dap-Kings, and Galactic; or appearances at fests like Bonnaroo, New Orleans Jazz Fest, High Sierra, Bear Creek, and Jam Cruise. The well-traveled band has released albums on Ubiquity, Shanachie, and Colemine Records and served as the studio band on hits like Alicia Keys’ “Teenage Love Affair” and Cee Lo Green’s Grammy-winning “Fool For You.” Critics like NPR and Jambase don’t shy away from heaping praise on a group with “irresistible funkiness and ability to transcend genre” (LA Weekly).

After so many years together, the reasons to continue recording and touring, to push onward and upward, are abundantly clear to the members of ORGŌNE. “I want people who’d never thought of this kind of music to be exposed to what we’ve put our hearts, time, tears, and joy into,” states de León. “I hope that we can accompany you on whatever trials you are going through and whatever happiness you find.” Reasons is the first of a trilogy of albums to be released in 2018 and 2019. ORGŌNE will tour extensively in 2019 behind the releases.

In their short time together, Cytrus has witnessed massive growth within itself and the surrounding community. Originally founded as a four-piece in early 2018 under the cover of HopSol, the ‘couple buds’ quickly began to absorb additional musicians before joining forces with a group formerly known as Bunk Foss. As a bi-product, the eight-piece has begun to build a dedicated fan base in the Northwest and beyond, co-hosting multiple sold out events throughout Western Washington and becoming a go-to act for promoters throughout the region. The merge sparked a turning point in the band’s sound, energy, and presence, ergo giving Cytrus its newfound name.