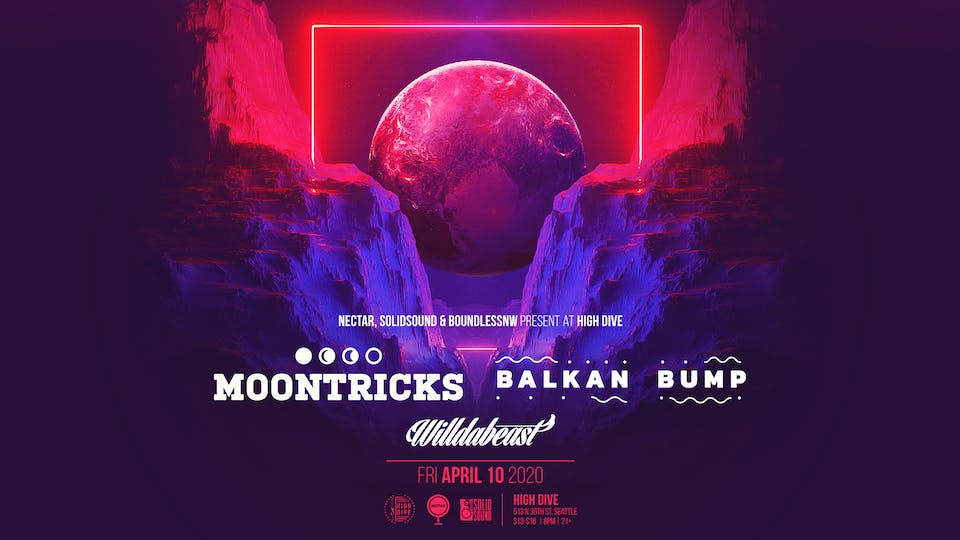 iCal
Google
Check out this monster Americana-Electronic bill at High Dive featuring MOONTRICKS + BALKAN BUMP along with Washington's own Willdabeast!

This show, originally scheduled for 4.10, has been rescheduled to 9.25.

Nestled deep in the beautiful Kootenay mountains of Western Canada lies the home of Moontricks, a duo whose timeless sound captures the essence of their rugged roots.

Combining their love of folk, blues, and electronic music, Nathan Gurley and Sean Rodman are blazing their own trail, merging musical worlds previously unacquainted and capturing audiences along the way.

Since connecting in their rural hometown through a shared love of music, the pair’s chemistry was instantly apparent. With Gurley at the production helm and Rodman on songwriting and vocals, they’ve birthed an authentically raw and seductive sound infusing grassroots blues, wistful soul, and gritty, boot­stomping bass. Their breakout organic hit “Home” has surpassed 1 million streams and their music is frequently licensed for film and television.

Once a best-­kept secret in Canada's festival circuit, Moontricks is now taking their sound worldwide. Feeling just as at home on an electronic festival stage one weekend and a folk festival the next, their spirited live performances feature an assemblage of guitar, keys, banjo, and vocals atop stunning original productions. Their touring schedule has seen them play across North America and Australia with stops at major festivals like Lightning In A Bottle, Rainbow Serpent, and Shambhala Music Festival ­ where they’ve become fan favourites, playing every year since their debut in 2013.

From rural beginnings to global festival stages, this humble duo is now taking on the world. Dazzling audiences with their infectious vibe and unmistakable rhythm, Moontricks are clear proof that originality and passion can spark a creative odyssey.

Balkan Bump is the newest project from trumpet player, producer and ethnomusicologist Will Magid.

Balkan Bump launched to an unexpecting audience in late 2017 with his debut track “Aymo” alongside superstar collaborators Gramatik and Talib Kweli. Finding an affinity based in his own Balkan roots, Gramatik has championed the new project; debuting Balkan Bump’s first live performance at Gramatik’s anticipated NYE show at Terminal 5; taking Balkan Bump’s live show on the road for the Spring 2018 Re:Coil tour; and releasing Balkan Bump’s debut EP via his Lowtemp label imprint. Since then, Balkan Bump has quickly blossomed to international audiences, performing at Coachella, Bonnaroo, Lightning In A Bottle and Electric Forest, and releasing collaborations with CloZee, The Gift Of Gab, The Geek x Vrv, Fakear, and more.

Will Glazer & Dan de lisle infuse live horns and synthesizers to compose and produce some of the most accessible and bass-driven beats around. From chill & laid back hip- hop to in-your-face, upbeat, funky bangers, Willdabeast has truly found its niche and quickly become some of the most sought after DJs and horn sections in electronic music. In 2014, Willdabeast joined up with Michal Menert (Super Best Records, PLM) on trumpet to help create and arrange the Michal Menert Big Band. Willdabeast is currently touring in Michal Menert & The Pretty Fantastics and MMBB.