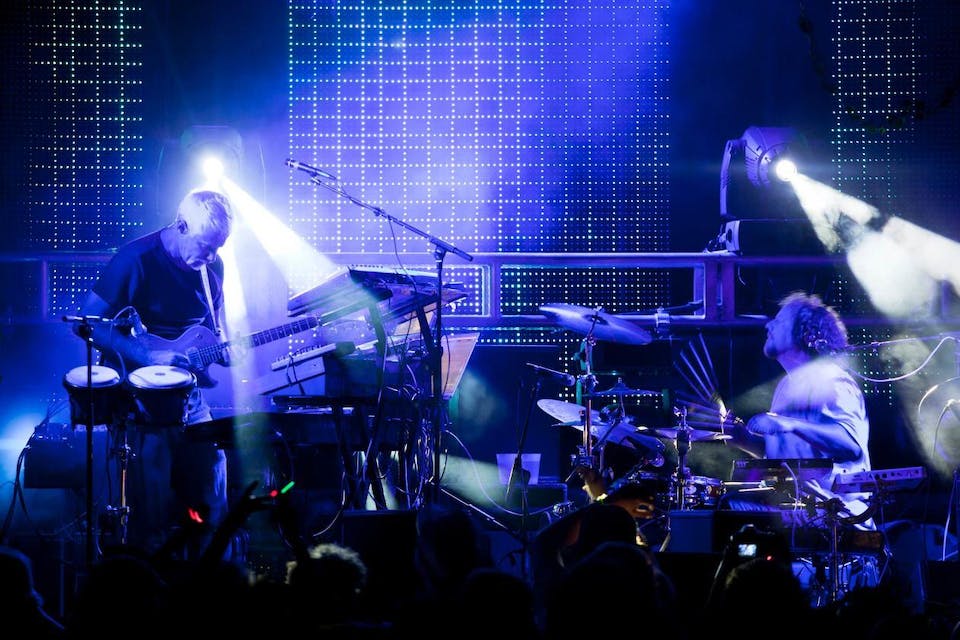 iCal
Google
Join us for a synthesis of electronic vibes and improvisations featuring EOTO! Calling all Jammers and Bass-heads, tickets on sale now!

The way music is produced and performed is growing at an astounding rate. From the roots of acoustic music to amped up rock n’ roll and into the electronic revolution, the options available to the modern musician are more like a scientific lab, then the campfire jam from where it all started. From the controls of a tiny laptop, a performer now has the power to mix, change and loop sounds in a concert setting with great ease. This modern twist of technology is bringing a new level of music to the electronic dance party.

While the genre of live electronica is relatively new on the music circuit, nobody is breaking the boundaries of live producing and improvisation like EOTO. Fusing elements of live instrumentation, house music, dubstep and electro into their dance ready sound, the band will be taking the country by storm beginning in late September for their perennial fall tour, performing 33 consecutive nights in a row.

Consisting of Michael Travis and Jason Hann the duo mixes the organic sounds of live drums, bass and guitar through a variety of programs and gadgets to create a style of music that is more likely found in a dance club, then a live music theater. What sets EOTO apart from other artists in this emerging genre is how the music is created. While some artists may spend hours pre-mixing samples and elements of music for their live show, EOTO uses nothing pre-recorded, giving them the ability to approach each song with on-the-spot spontaneity and 100% live improvisation.

Because of the ever-changing sound and style of music, it’s hard to describe a band like EOTO. In a recent discussion on the bands highly active Facebook page, the thousands of subscribed fans were asked to describe the band in their own words – descriptions ranged from mythical to visual, each in awe of the duo’s ability to create high octane dance music in a live setting. A trait that has fans old and new catching multiple shows on a tour and packing venues wherever they play. Or maybe EOTO is selling out venues around the coast for the spirit of dance music they bring in general.

It should come as no surprise that the members of EOTO have performed with a range of musicians second to none. Their combined resume includes the likes of Isaac Hayes, Loreena McKinnett, Herbie Hancock, Drummers of STOMP, DJ Tequila, Les Nubians, Stanley Jordan, Les ClayPool, Joshua Redman, Arturo Sandoval, Bela Fleck, Trilok Gurtu, Charlie Hunter, Mike Marshall and Dave Grisman just to name a few.