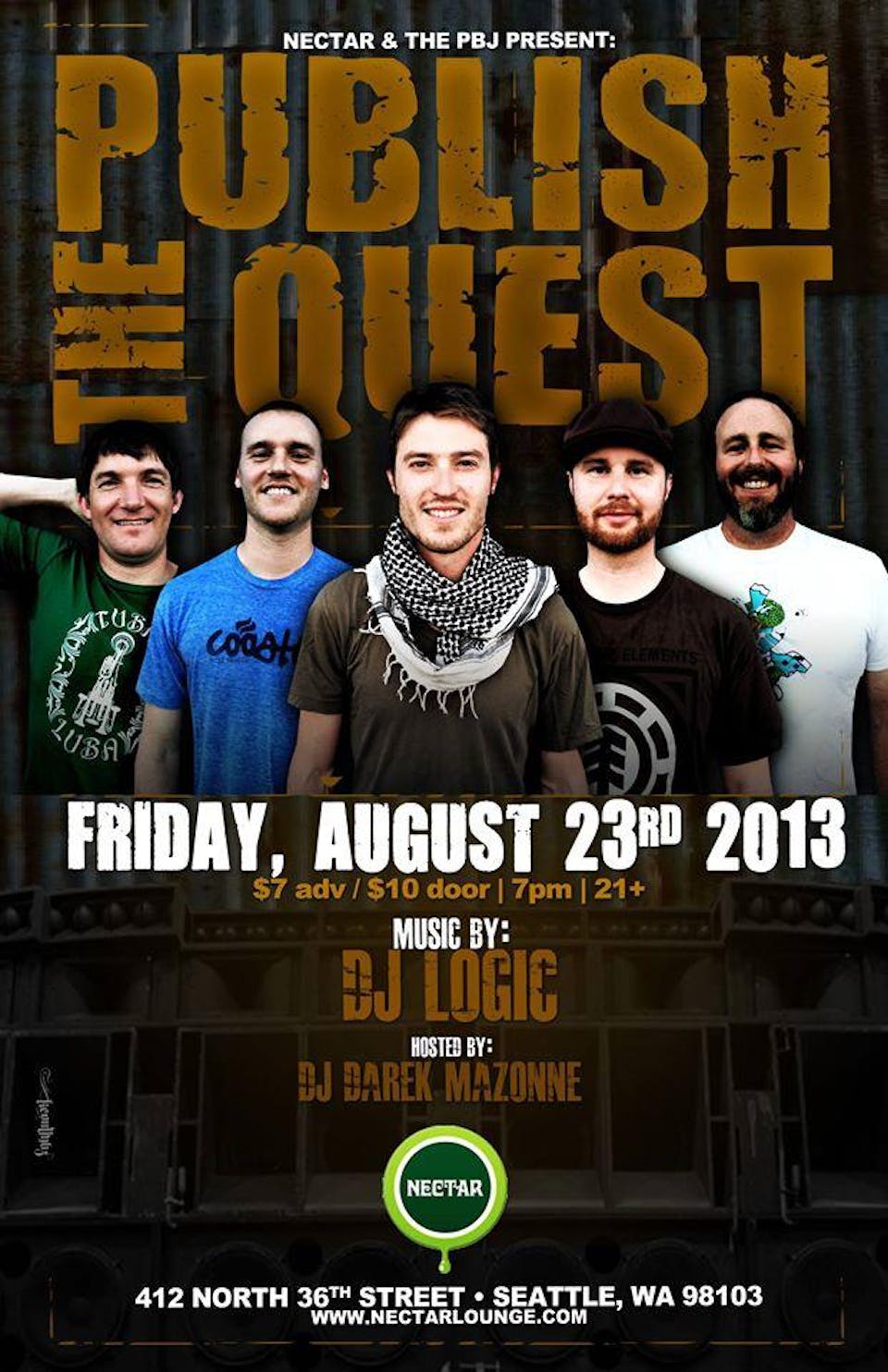 iCal
Google
It's a night of Roots and Soul with Publish The Quest with Andonimous! Tickets available today!

“If you’ve never heard of Jacob Bain and Publish the Quest, I’ll set it up for you: A hard-hitting hybrid of Afrobeat and hip-hop, something organic like Blitz The Ambassador or Talib Kwali. Some of the beats come partially programmed, but generally speaking, Publish the Quest in bold horns, percussion, melodic guitar, and bass going heavy on the funk.How good is Then What!? Really good, although definitely more attributed to the instrumentation than the raps. The band is tight and full of good ideas. They swirl in, layer, and offer a set of 10 danceable tracks. In the title track, guitar and bass take the lead, in the vein of Fela Kuti’s finest. The horns are sharp and dynamic when they pounce. The vocals are some of the best on the album. The groove is all Afrobeat deliciousness. “I got hope/ Tell me what then?” “You just can’t quit until the setting sun.” Are the lyrics earth-shattering? No, but they fit the vibe and are energizing. The song overall is a knockout. “Gotta Keep Movin!” is even tastier. The horn line is outstanding and the groove momentous. “Even when we find ourselves two steps ahead/ we gotta keep movin,” is great, but here’s my critique: “Why the war? What’s it for?” I don’t know, and I don’t know what war you’re talking about. While everything else in this song is catchy, tight, and blast-able, the lyrics linger on the edge of vagueness. This song, in particular, is so well made, but when Bain sings, “Think about how far we’ve drifted.” I don’t know who “we” are or what we “drifted” from. It’s hard to connect with this song, and others on the album, on that deep a level. Still, such a miss doesn’t detract from the arching awesomeness of this album. “You Never Know Who You’re Going to Meet” is one of the best songs, and some of the better lyrics. The song paints the picture of a world of strained relationships and wandering. He reels it in to universal possibilities. “Rethink the way that you’re doing some things,” he says of meeting people. Added violas weave texture and the acoustic guitar contrasts the hefty drumming wonderfully. These songs relate tales of power struggle, fighting the Man and, ultimately, approaching this project with interest in several influences. If you like Afrobeat and organic hip-hop, you’ll find Publish the Quest to massage all the right places. The album is well mixed, nothing is lost, and it sounds nicely configured without being overproduced. Props to Mell Dettmer and Jacob Bain for putting the time in. All-in-all, very good stuff. Bottom line: Afrobeat collective with guest vocalists rev up the hip-hop for a scorching and danceable set of tunes.” – review by John Powell – http://www.angelica-music.com/reviews/jacob-bain-and-publish-the-quest-now-what-album-review