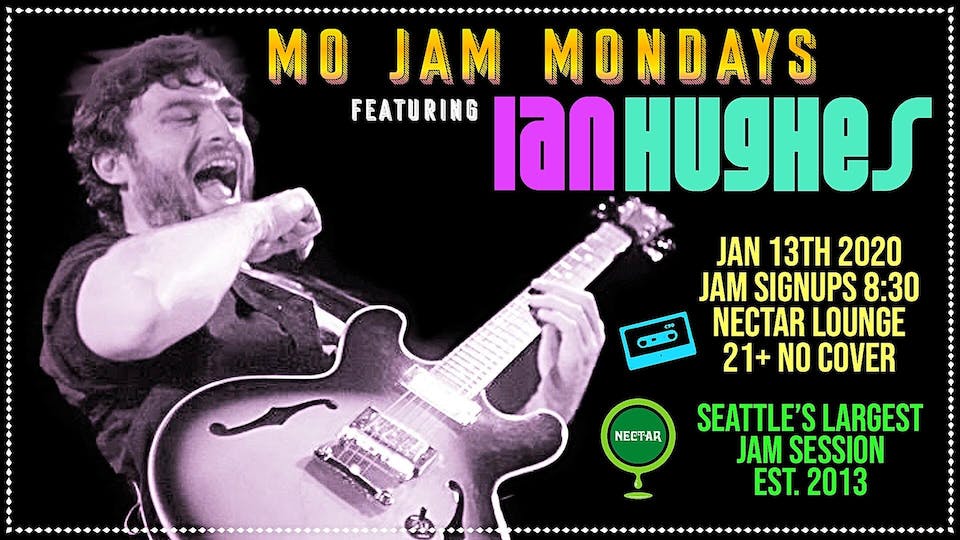 Born and raised in Seattle, Ian Hughes is a lifelong composer, an award-winning guitarist and improviser, and passionate music educator. Ian was a founding member with Mo’ Jam Mondays and a weekly member of the house band from 2013-2017. From his time at Mo’ Jams as well as some other adventures Ian has had the honor of playing with a who’s who list of the Seattle scene, as well as some notable touring musicians, some of the most influential were Farko Dosumov, Marina Albero, Victor Wooten, Thomas Marriott, Ahamefule J. Oluo, Jessica Lurie and Roy Hargrove. He has gone on to cultivate his composer chops by writing for his project Freudian Slurp, an instrumental fusion band that draws heavily from cinematic and modern jazz influences, while still prizing a driving groove, memorable melodies and group improvisation.

In addition to his jazz and fusion exploration, Ian also works as a performer and recording artist in many genres. This includes regular solo guitar performance, neo-soul, RnB, musical theater, country and more. He platys every Sunday night in the host band for Sunday Night Sessions at Rumba Notes in Columbia CIty. He maintains a full studio of private students, in addition to coaching ensembles at Seattle's Jazz Night School.

8:30pm: Sign-ups. COME EARLY TO GET INTO THE ROTATION

All Improv Jam starring you & a band of strangers making it up!

Join the Mo' Jam community every Monday night for an all-inclusive jam session. Since 2013, Musicians of all genres improvise together and create original grooves on the spot. Open to all Instrumentalists, Vocalists, Percussionists, Emcees, Turntablists +++.

Thanks to our sponsors and supporters: